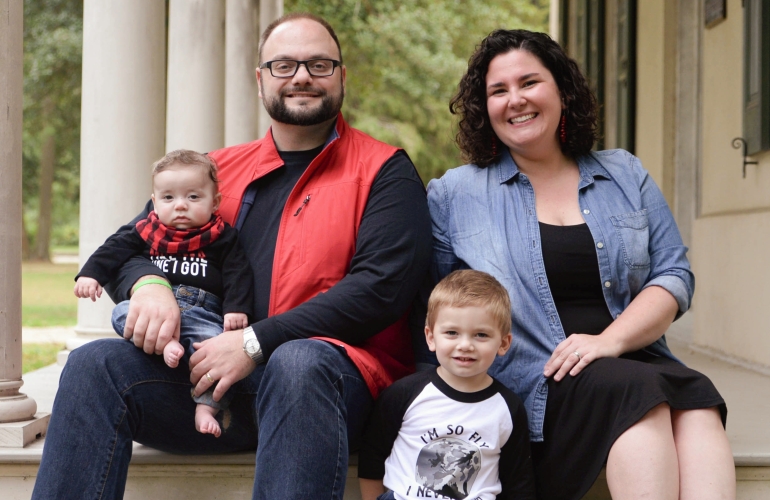 When Doug first experienced heart palpitations, it was easy for him to write off as something related to his lifestyle, like gaining a bit of weight during his first three years of college. As a kid, going to a doctor was seldom the first course of action when illness arose. And plenty of twenty-one-year old’s felt bloated and breathless sometimes, right?

After a few weeks hoping the mysterious symptoms might go away with time, Doug gave in and visited a nearby urgent care clinic. He had his first-ever echocardiogram, which would become the first drop in a waterfall of bad news.

“The doctor came back in and said, ‘You can’t do anything. You can’t go up stairs. I don’t want you exercising. You need to get a cardiologist immediately. You have cardiomyopathy.’”

The news was shocking, not only because of the prognosis but also because Doug’s father was recently diagnosed with manageable dilated cardiomyopathy. They were never informed that his condition might be genetic, explaining Doug’s increased risk of heart failure.

He would continue at college, finishing his senior year under constant stress that any moment climbing up the university hills could send him to the emergency room. As his condition didn’t improve, he was ordered to receive a defibrillator as his risk for cardiac arrest continued to increase.

But as many will tell you, living with advanced cardiomyopathy and managing a defibrillator and pacemaker is limiting to life experiences. He had to give up all strenuous activities while arrhythmias developed, leading to the need for therapeutic shocks to prevent his heart from stopping.

In the meantime, Doug was adjusting to life with a chronic condition and recently switched jobs. His new manager was unwilling to accommodate necessary changes in his ability to work after the increase of symptoms, including spontaneous loss of consciousness from changes in heart regulation. Because of this, he asked to work from home a few days per week, as he was no longer able to drive safely to work.

“I was met with: ‘If this job is too stressful for you, then you shouldn’t be working.’”

After a few years of managing symptoms, Doug’s condition wasn’t improving. His doctor suggested looking into a heart transplant and joining the region’s waitlist. He knew it was inevitable, but still a heavy burden to carry. Not only would a heart transplant be a risky surgery, but it reaffirmed the severity of his cardiomyopathy beyond what he previously admitted to himself.

In January 2017, Doug experienced several episodes of ventricular fibrillation. He remembered his heart beating so quickly that it was unable to adequately pump blood to the rest of his body, indicating that his course of therapy was beginning to fail.

He received an emergency ablation. After the mishandled procedure nearly cost him his life, he would remain in the hospital for three months. During this time, he would continue going into cardiac arrest, even flatlining after the doctors forgot to turn his defibrillator on.

Doug remembered his months in the hospital blurring into one terrible day. After stabilizing on a ventricular assist device, he was too weak to leave the hospital. He became depressed, unable to leave his bed. Even with a constant stream of friends and family, the experience was isolating. He couldn’t help but feel like a burden. Even with their best intentions, others failed to bring joy into a situation that looked so bleak.

When the day came and Doug received the call that a heart was available, it was the first sign that the misery might soon come to an end. While there was relief that he might soon feel fresh air outside of the hospital walls, the road to recovery would be physically draining. He recalled, “there was still so much misery of being unable to sleep and being uncomfortable” adjusting to his new heart.

“There was one day, they wheeled me out to the courtyard, and it was the first time I got to feel the sun in months. And it was that kind of thing that made a difference – when people went out of the way to show that they cared.”

Doug recalled the experience of being a young person with cardiomyopathy as stigmatizing. Clinicians would often ask about the cause of his early diagnosis, suggesting he was heavily involved with drugs or alcohol, or didn’t take good enough care of himself. Looking around the cardiac centers, he felt alone in his age and didn’t have anyone to turn to for a sense of hope.

After all the time he spent in the hospital, the one thing he wished was for more peer support groups for other young men experiencing this condition. While there were many ways to address his physical and emotional health, his social health took the most significant toll. He longed for a network of young people able to share their experiences with cardiomyopathy and transplants.

“I wish there was a program where young people who have already gone through this to just sit with others awaiting a transplant and chat with them about what to expect, because going through this alone isn’t easy.“

Doug has a long road ahead of him. The medications given after his heart transplant caused non-Hodgkin’s Lymphoma, a rare side effect. While he is currently in remission, the underlying stress of cancer is the cherry on top, as if he wasn’t handed enough complications.

While he is looking forward to a longer and healthier life ahead, both of his major diagnoses will continue to loom over his every decision. A bit of hope has been restored since changing jobs to kinder, more accommodating spaces that understand the challenges of managing medical complexities an chronic disease. Their commitment to workplace flexibility has allowed Doug to excel in his career. His new heart has grown to welcome his two sons, and a relentlessly loving wife who all look forward to years ahead as a family.

View all posts by katepecora

Chicago was one of my favorite cities, and was made even better by learning from cancer survivors at the University of Illinois Cancer Center. ⁣ ⁣ Angela, Maxica, Carol, and Kimberly all taught me what it means to be brave as a young woman battling cancer 💪🏼⁣ ⁣ You can find their stories and more at the link in the bio. ⁣ ⁣ Image description: ⁣ 1. Carol (left), Kimberly (center), and Kate (right) posing for an interview photo⁣ 2. Carol with pink boxing gloves ready to fight her cancer⁣ 3. Carol and her coworkers wearing #TeamCarol shirts
Finally getting back online after taking a break for the holidays!⁣⁣ ⁣⁣ A few weeks ago, I was able to meet with Alicia in Ohio where we discussed the current caregiver crisis and shortage of home health aides across the United States. With low wages and high frustration, many personal care assistants and aides have dropped out of their roles, leaving people with various disabilities, like Alicia, unable to live a quality life independently. ⁣⁣ ⁣⁣ Alicia is a disabled artist, looking to bring attention to the daily challenges she faces negotiating with Medicaid to provide adequate care. ⁣⁣ ⁣ More on this story and others can be found at the link in bio! ⁣ ⁣⁣ ———⁣⁣ ⁣⁣ Image Description: There are three of Alicia’s recent works: the first is a wheelchair repurposed to highlight disability inclusion at the community level, the second is a painting of many people with the words, “Provider Shortages”, and the third is a painting with various people needing caregivers and the words, “every 8 seconds, someone needs a caregiver”⁣⁣ ⁣⁣ ⁣⁣
Had quite the week.⁣ ⁣ Traveled to New Jersey and New York to learn from three individuals on their experiences. The drive was long, but well worth it.⁣ ⁣ More than anything, I’m learning that people just want to be heard. Their frustrations with the system are justified. They want something to rectify the struggles they have encountered so others don’t have to endure the same hardship. ⁣ ⁣ Gearing up to head back out in a few weeks for the Ohio Valley region. ⁣ ⁣ New post up today and more later this week.
So excited to begin this project! Follow the link to read the latest posts or share your own story!
%d bloggers like this: